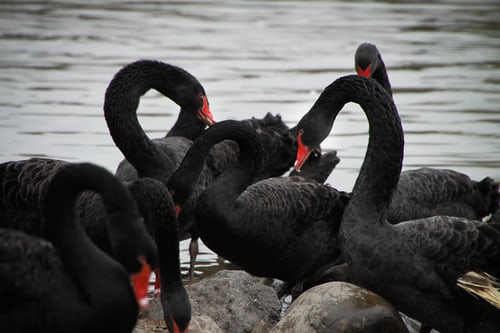 Black swan as a metaphor for unprecedented events

In much of my research for clients in the past couple of months I have often seen the term black swan. As I know swans to be white in most cases, I was intrigued by this phrase suddenly popping up all over the place.

The term black swan has come to be associated with COVID-19 and its various impacts.

According to macmillandictioinary.com, “The phrase black swan is a metaphor describing an event which is unanticipated (perhaps because it seemed impossible or because no-one had considered it before), but which has very far-reaching consequences.” In terms of grammar black swan occurs as a countable noun and is also often used as a modifying adjective which usually appears in the expression black-swan event.

You can see how COVID-19 fits perfectly into this expanded definition.

Macmillan cites the terrorist attacks on the World Trade Centre and the Pentagon in 2001 as other black swan events.

I also recall the Thailand tsunami in 2005 and possibly the death of Lady Dianna Spencer in 2011 as black swan events.

Perhaps you have experienced some personal black swan events which have impacted your life, such as divorce, or death of a loved one. See how those fit the expanded definition.

The investment sector also uses the term frequently especially in relation to the global economic turmoil of recent years.

Until now, you probably thought that actual black swans did not exist. But apparently, they did.

According to macmillandictionary.com “The analogy is drawn from the discovery of black swans in Western Australia by Dutch explorer Willem de Vlamingh in the 17th century.” At the time, Europeans had believed that all swans were white, so finding a black variety was an unexpected event never experienced before.

Early use of the term black swan dates back to the late 14 century, says online etymology dictionary and cites black dahlia as a similar term that emerged in the 19 century.