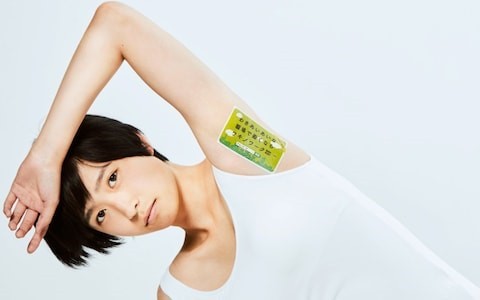 I was intrigued and a little disgusted to read that Japan is using women’s armpits as an advertising medium.

In disbelief, I asked Google and got more than 8 million responses confirming this phenomenon.

A cosmetics company has elected to place advertising in the armpits of commuters.

This must mean that in Japan space is at a premium or is this just a massive leap in creative thinking. ‘Advertise our underarm cleaning product on the underarms of attractive women.’

That’s the proviso; to get the ad stuck under you arm you need to have pretty armpits, or pretty faces at the very least.

Apparently, “the Wakino Ad Company – “waki” is the Japanese term for armpit – was set up earlier this year as a subsidiary of the Liberta beauty products firm, which does a brisk trade in items designed to make armpits beautiful,” so says Telegraph.co.uk.

What’s also amazing is that these pits are available per hour of exposure for about 70 pounds. The only caveat is that the models must be holding overhead handrails or be in an extended stretch position to have the armpit in full view.

More than 1300 wannabe billboards (models) showed up to audition for the job.

Wakino is not stopping there. They are looking for more models, male models too and will run a beauty contest to find the most attractive armpits in Japan.

This is all to stimulate interest in the client’s underarm hair removal procedure, claimed to be painless.

Taking Wakino’s lead, there’s clearly a market for commuters of all nations to find the advertising space within themselves, or without. What about foreheads, what about backs of hands, thighs and calves – back and front; men’s chests in beech weather, ladies’ bikini-clad midriffs?

There’s only one snag – there’s a seasonal imperative – no armpits for the colder climes and in extremely low temperatures, no body parts at all.

What’s next? The ears of guide dogs that travel with their commuters?

Perhaps Wakino should have a rethink and Japan return to advertising on inanimate objects.

Otherwise let’s commit our advertising messages to Donald Trump’s forehead – it gets a fair measure of global exposure.

SA not in good Moody