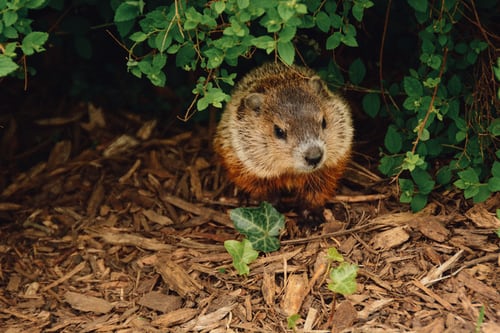 From Ricky Gervais’ production of “Afterlife” (Netflix) to a number of recent articles in the press, the term groundhog day, seems to be popping up everywhere. Not sure what it meant, I set out to investigate.

My research suggests that sectors of northern America determine weather patterns based on the behaviour of this particular rodent.

Also known as a woodchuck, this large ground squirrel makes his home in the eastern United States and is also found throughout Canada and parts of Alaska.

Rather than consulting a meteorologist, people observe the Groundhog on 2 February when it is said to emerge from its long slumber underground. If a shadow falls on the animal, i.e. the sun is out, it is said to predict a further six months of winter. Should there be no shadow, it’s a sign that spring will be early.

Cambridge Dictionary says it is “a situation in which events that have happened before happen again, in what seems to be exactly the same way. Other dictionaries offer a similar definition.

Crafting this idea into a cinematic expression, Groundhog Day released in 1993, sees Bill Murray play a smug weatherman in Punxsutawney, who has to relive the events of February 2nd, day after day.

MacMillan Thesaurus gives repetition, recursive, reappear, iteration, repeat, rediscover as some of the synonyms, none quite as expressive as the one named for the rodent. The meaning in this sense, is only as a result of the movie, according to Collins Dictionary.

In some respects, this reminds me of the Covid-19 lockdown situation, where we are constrained in movement and activities, undoubtedly a challenge to mental health. One day seems much the same as any other, with highs and lows non-existent.

On the horns of a dilemma: origin of idioms

Waiting for the cows to come home: Origin of idioms