Today I celebrate Dr.Seuss for all the entertainment he provided in my childhood.

I loved his books and would sleep with them under my pillow so that the stories would fill my dreams and occupy my earliest waking hours.

I fondly look back on stories such as the ‘Cat in the Hat’ and ‘Green Eggs and Ham’. And who can forget ‘How the Grinch stole Christmas’ which must have had hundreds of iterations since the great Seuss’s original story.

March 2 marks the birthday of the man who gave us more than 60 titles, not just literary works, but memorable illustrations too.

Dr Seuss’s first book ‘And to Think That I Saw it on Mulberry Street’ was rejected 27 times before it was published by Vanguard Press in 1937, according to www.biography.com

According to the site, ‘Cat in the Hat’ was hailed as the turning point in the doctor’s career. He was asked to write a book that would address 220 words of vocabulary and thus his contribution to children’s literature was recognised and his career as a writer confirmed. This was in 1957.

Not only a writer, Theodor Seuss Geisel (March 2, 1904 to September 24, 1991) was also a cartoonist and a man with a social conscience teaching about kindness and environmental concerns.

In ‘Horton Hears a Who!’ his message to children was to treat all fellow human beings with kindness. This received Hollywood treatment in 2001 as an animated feature film starring Jim Carrey as the voice of Horton, Steve Carell as Mayor, Carol Burnett as Kangaroo and Seth Rogen as Morton.

Similarly, The Lorax in 2012 featured Danny DeVito among other Hollywood stars.

This is just a smattering of Seuss’s great contribution to children’s literature where my love for books and language began.

I encourage you all to go to https://www.biography.com/people/dr-seuss-9479638 for more on Dr Theodore Seuss.

Thank you, Dr Seuss, for being a great study. 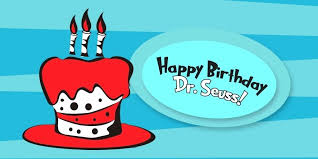